Our School App Stay connected on the go...

Welcome back to Cucina! We are so glad to have you back, providing us with lovely meals just like Tuesday’s chicken katsu and stir fry! @SchoolCatering https://t.co/H8jOmT5D5q

Today is the day for another Covid LF test for our students, and we hope this is reassuring now that some restrictions have started to be lifted. Don’t forget to let us know your result - thank you! https://t.co/j8VRquzMbG

Flashback to last week, when we had the pleasure of hosting the immunisation team... as always our students were exemplary in their attitudes towards the team and their immunisations. Thank you Mrs Jones for organising it all so well. #Respect #Community #ThankYouNHS https://t.co/QpgoZL5Znf

Wishing our community a safe and happy break. Thank you for all your support this past term 😊 https://t.co/lgPUooZ7m0

Would you like to join our friendly team? We are currently looking for Lead Practitioners in English, Mathematics, Computer Science, Business Studies and French (MFL), to start in September. You can read all the relevant information, and apply, here: https://t.co/P46YUYUIfI https://t.co/Zt1A7MOIOd

@MellishNatalie @mellyman10 @gwilym47 Thank you, we are very proud of our performers! 👏👏👏

Despite the challenges, our Year 9 students are continuing to work towards their Bronze @DofE awards. Take a look at some of the delicious dishes the students have been cooking up as part of learning a new skill! @DofESouthEast https://t.co/0foyfIJTSG

Don’t forget, today is the day to test at home for our students. You have been sent a link through which you can report the result to us. Thank you for helping us to keep our school as safe as we can. https://t.co/g76q1S5OkZ

The Music department has organised a Spring Concert this Thursday at 4pm, live on YouTube: https://t.co/71rIHeTYii https://t.co/XdETI3UwIo

It’s Census day tomorrow - students do you know why, and the part you play? #Census2021 https://t.co/PykN3cTMo8

A positive list from our headteacher this morning... https://t.co/BCwd9l6dly

Rest-assured, no-one is leaving us, but it would be a great time for someone new join us at our wonderful school! https://t.co/g2qTpsq6v0

This is brilliant! Well done, Topaz class - we can’t wait to see you in the virtual flash mob! https://t.co/AavhZL0r6x

How wonderful to see! Well done Amethyst, we can’t wait to see you in the flash mob! https://t.co/mtlO2cfzYs

Our Year 11 students have painted their feelings about what it’s like to be back at school... we know how you feel! 😊 Welcome back! https://t.co/ACtTAolAwP

@imascientist A massive thank you from Miss Adkins and her students to the psychologists who gave up their time to talk with them last week. It’s been such a great opportunity for them to see how psychology is used “in the real world.”

@PeeDub724 Apologies - we sent out a new link over the weekend and will double-check that it’s okay again today.

@CudmoreKaren @SusanMichie Good morning. The daily LF test is currently not able to be used as an alternative to isolation, in the event that someone is identified as a close contact of someone with Covid-19.

We love the message conveyed here in this video from @PiXLclub. We cannot wait to have our whole community together again, we’ve missed you! https://t.co/JKFp1VEGeN

What can double the chance of a child becoming good at reading? #turnonthesubtitles https://t.co/jrqWmmDakA https://t.co/0CUhniQ2Pt

If you have been inspired by this week’s activities you can download your own career action planner to help get you start planning your future. https://t.co/7qyXCBkCAk https://t.co/iE25cs2VGE

We have some IT network issues this morning and it will likely affect our live lessons, unfortunately. Our IT Team is working hard to fix the problem and we will let our families know what the impact is shortly. Apologies.

And we’re off! Join our auction on our YouTube channel right now! Good luck everyone... 🖼 https://t.co/Wg0jtLDhRU

@Worldbookday has teamed up with #NCW2021 to create an interactive What’s your story? activity booklet. It’s been designed to help primary school children discover more about careers in publishing but perfect for Y7 too. We love it! https://t.co/QNQ1ClxZHP https://t.co/me22jcEiP7

@NCS programmes are happening this summer! Sign your teen up today to learn new skills, gain confidence, stay away from home and make a real difference this summer! Places are limited so don’t miss out. Visit https://t.co/4NgngzYqTF #NoWeCan #NCSSummer @IngeusYouth https://t.co/dBNEoBzevb

Our production of Zorro was the UK amateur premiere, which originally debuted in London’s West End in June of 2008, receiving rave reviews. Zorro, ‘the fox’, was created in 1919 by Johnston McCulley for his novel ‘The Curse of Capistrano’. It was the first of 65 immensely popular tales in which Zorro fought injustice in Spanish California’s Pueblo de Los Angeles.

Since then, Zorro has appeared in films, TV shows, plays, ballets, operas, novels & comic books, and this musical version retells the dramatic story with spectacular sword-fighting and incredible magic – all set to the famous red-hot Gipsy King beat brought to the stage with the authentic colours of traditional flamenco.

One of the challenging parts of Zorro was staging the sword-fights, with students who had no real experience. Fortunately, we had the capable sword-arm of fight director Gary Andrews, who came in on three occasions to teach students the art of sword-fighting for the stage... 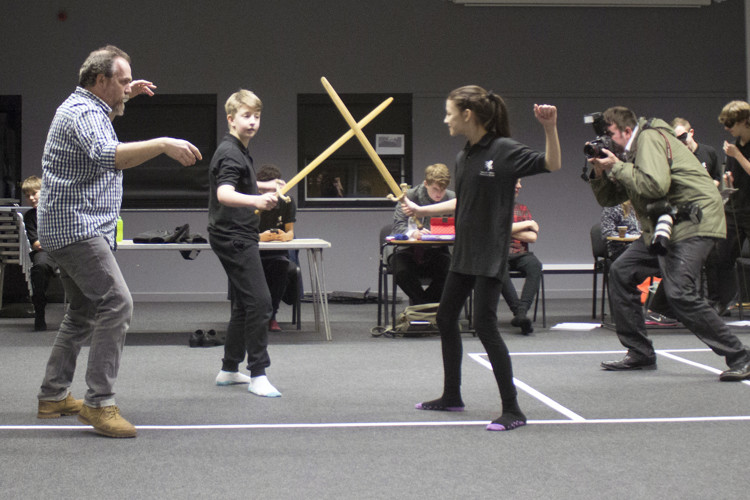 Gary Andrews, who has been directing fights at schools and theatres for around 20 years, assessed the students’ ability by teaching them the footwork, guard positions, attacks and parries that make up basic fencing. He then taught them the basic five point numbering system used to annotate moves.

‘Each part of the body corresponds with a number so it makes instruction a lot more accurate,’ said Craig Barden, who plays Ramon in our production. ‘It helped me find confidence in my ability and fluency in my technique.’

‘The system goes clockwise around the body,’ explained Mr Andrews. ‘The right leg is number 1, right shoulder is 2, head is 3, left shoulder is 4 and left leg is 5. So, if I say “attack 2,1,2,4,3” the actors know the sequence and target of the attacks - and defences!’

Students were lucky enough to use Mr Andrew’s professional sword replicas, which helped them get into character.

‘Apart from fighting imaginary monsters in my childhood with a plastic sword, I had never done any sword-fighting before,’ said Harry Harding, who plays Diego De La Vega. ‘It was a thoroughly enjoyable experience which gave me an idea how heavy the swords would be when we do the show.’

Each fight was choreographed taking into account the ability of the characters (Zorro is an expert, the soldiers are less competent) and the story the fight should tell: is it an easy victory, a comical action sequence or a dramatic showdown?

‘We also take into account where the audience is,’ said Mr Andrews, ‘so we show the fight from the best angle to hide all the tricks we use to make it seem real!’

After plenty of practice at half-speed, students found the fight movements becoming more automatic, so they increased their ‘performance speed’ to about 75%.

‘This is usually fast enough for an audience seeing the fight for the first time,’ added Mr Andrews, ‘but performance adrenaline usually adds another 15% or so!’

‘Having practiced the sequences many times,’ said Harry, ‘my muscle memory knows what to do when we fight so I feel very prepared. Mr Andrews was an excellent teacher and he was very laid back when we made mistakes.’

Not a Good Look

‘When I was eight I used to play sword fighting with my cousin,’ said Craig, ‘which resulted in me sustaining an eye injury. Not a good look! Luckily this experience taught me how to get sword fighting right without being an idiot this time!’

Mr Andrews paid a further two visits to Valley Park. ‘I usually come back a week or two before the show opens,’ he said, ‘to polish the fight and make sure no bad habits have developed – or to tweak any moves that are not quite working.’

‘I can honestly say that your students were amongst the politest, keenest and most able I have taught,’ said Mr Andrews. ‘They were quick learners and very focused, and I’m sure that this will lead to a really great show.’

*
Cookie Notice: We use cookies on this site to improve your user experience.
Accept Find out more